The Poisoning Effects of GranuFlo and NaturaLyte Hemodialysis Solutions 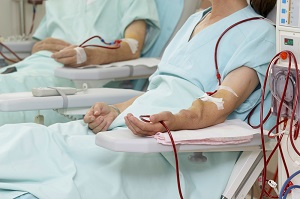 In the United States, chronic kidney failure affects approximately two out of every 1,000 people. When kidneys do not function properly, hemodialysis is necessary in order to remove toxins and wastes from the blood.

The function of dialysis machines is relatively simple. According to the National Institute of Diabetes and Digestive and Kidney Diseases, the dialysis machine acts as a scrubber to remove naturally occurring waste (such as excess potassium, acids, and salt) from your bloodstream. The process can be described in three parts:

The miraculous part of the procedure is how the blood becomes clean within the machine. The dialysate solution essentially scrubs, or filters, the blood. The acid-based medications remove the toxins, while the bicarbonate in the solution neutralizes any excess acids that have built up in the blood.

The Problem With GranuFlo and NaturaLyte

Up until 2012, the dialysate solution produced by Fresenius Medical Care (FMC), known as GranuFlo, and its sister medication, NaturaLyte, were the most popular drugs used during kidney dialysis treatments. FMC also happens to be the largest dialysis provider in the United States. As a result, the drug was widely used among kidney failure patients, with estimates as high as 50 percent (over 400,000 patients) receiving the drug.

The problem with the GranuFlo and NaturaLyte solutions, as the Food and Drug Administration (FDA) discovered, is that certain acid concentrates—concentrations of acetate or sodium diacetate—contained within the medication can produce additional bicarbonate that isn’t factored into the overall dosage. Although this may not seem like a big deal, since the drugs were specifically designed to be mixed with bicarbonate, the issue is that the solution is specifically calibrated to have the exact proportions needed for your blood. Any excess production can cause serious harm, including heart palpitations, arrhythmias, and death.

Did Fresenius Conceal Information About the Dangers?

After beginning its investigation, the FDA discovered that FMC had data and knowledge from 2010 of the potential health risks, but had kept it within the company rather than sharing the life-saving information with the public. The FDA even found an internal memo dated 2011 warning doctors within the company that “failure to properly use one of the company’s products appeared to be contributing to a sharp increase in the risk of patients dying suddenly from cardiac arrest.” The New York Times corroborated the existence of the memo and even publicly shared its contents in 2012.

The FDA then discovered the contents and results of the 2010 FMC study where Fresenius observed patients who underwent dialysis at its clinics. The results were startling:

Despite this knowledge, Fresenius continued to market and sell the drugs to consumers and physicians without providing proper warning of its dangers. This enabled the company to ensure that its own drugs were widely used within its clinics. Fresenius also sold GranuFlo to other dialysis centers.

Once the data was made known, the FDA issued a Class I recall, with the stipulation that FMC replace their labels with new ones that caution clinicians to be aware of the adverse effects. However, many patients who received GranuFlo during dialysis received these warnings too late, and suffered severe and life-threatening consequences.

This is why it is extremely important to recognize any negative effects of your medication as soon as possible. If you experience any adverse reactions while on dialysis, especially if you are aware that you’re using GranuFlo or NaturaLyte, get medical attention immediately.

The Effects of Bad Dialysis Medications

The effects of the solution’s concentrations of acetic acids and acetates result in numerous risks from a condition called metabolic alkalosis. Metabolic alkalosis is a term that describes the elevation of the body’s pH levels in tissues outside of the normal range. Metabolic alkalosis can occur as a result of using GranuFlo because the use of the drug has been shown to result in dangerously high serum bicarbonate levels in patients. Typical symptoms and effects of abnormal pH balances caused by this solution include:

All of these can cause severe discomfort, pain, and tissue damage as well as place you at risk for serious injuries.

You May Be Eligible for Compensation for a Dialysis Injury

Have you experienced side effects as a result of using GranuFlo or NaturaLyte within the last five years? Have you been experiencing headaches or chest pain since being on dialysis? You may be entitled to join the increasing number of plaintiffs who have filed lawsuits against Fresenius Medical Care for the following types of compensation:

However, pursuing a claim requires the guidance of an experienced legal professional in order to obtain the maximum compensation possible. Contact us today by filling out our online form or by calling us directly at 888-526-7616 for a FREE consultation. We’ll be more than happy to explain your rights and options.

Make sure your family and friends are aware of the dangerous risks of GranuFlo and NaturaLyte. Use your social media to share this page with them via Facebook, or tell them to contact us to discuss any potential questions or concerns they may have about prescription drug effects. Remember, they may not know their risks until it’s too late. Act today and you may help prevent a tragedy.